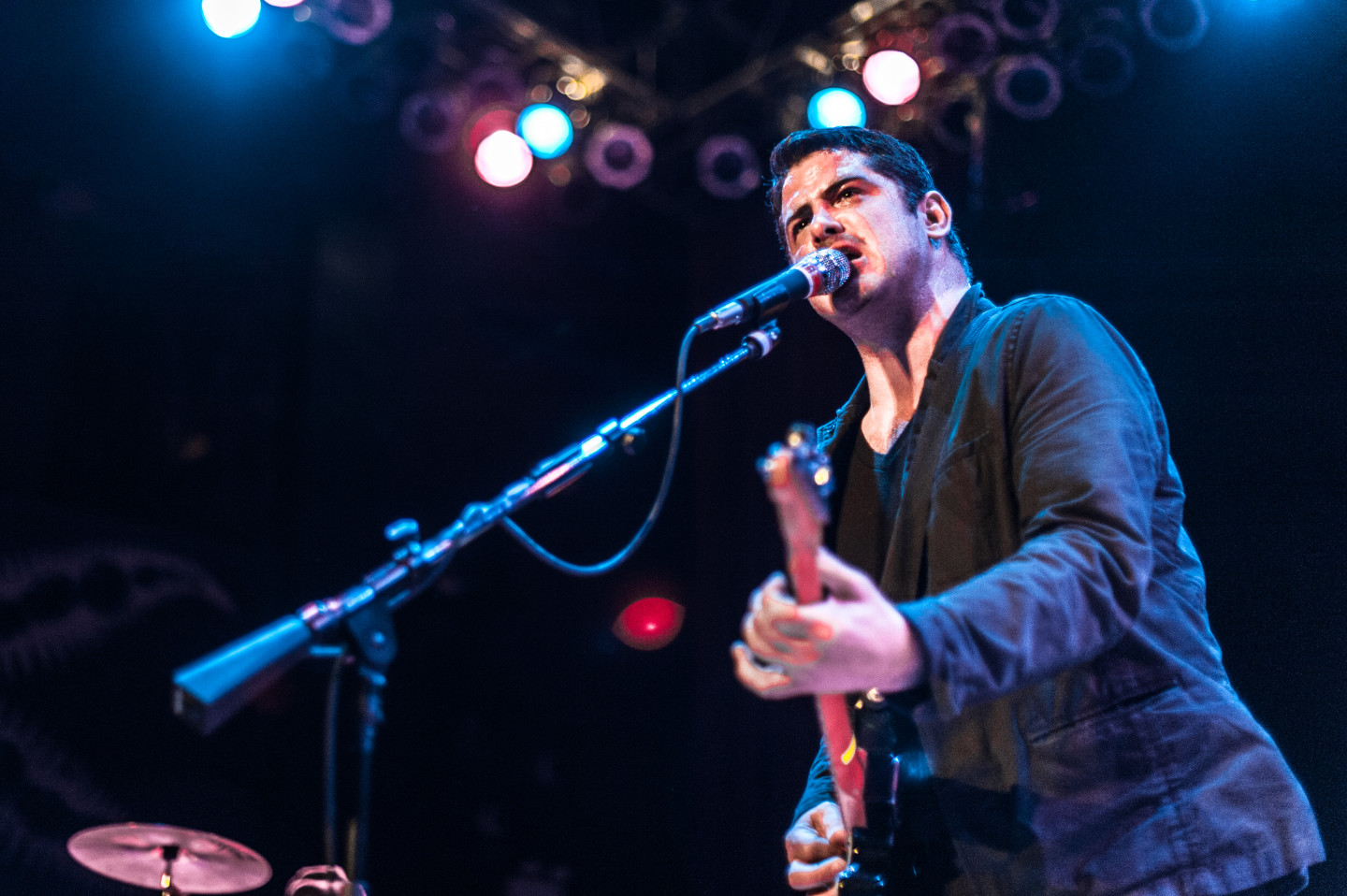 It must first be said that it is not a stand-in-front-of-the-microphone-and-croon type of singing that We Are Augustines frontman Billy McCarthy does. The man practically evolves singing into a physical sport, where every cell in his body infuses determined energy into the powerful words that have now bravely detailed his every life ordeal. When singing, he pleads, howls and roars, holding nothing back. He’s an artist with the aptitude to take fans on a journey that reflects his own odyssey; unfortunate tragedy and heartbreak that perhaps only passion, unapologetic persistence and ground-shaking vocals can heal.

With his very first word, the muscled alarm of McCarthy’s voice seized the House of Blues in Chicago and traveled over the air with vulnerable aggression. The mighty kick-off of the title track of the band’s debut album Rise Ye Sunken Ships commanded the attention of the crowd straight away at the top of their 8 song set.

The Brooklyn-based trio – rounded out by bassist Eric Sanderson and drummer Rob Allen – continued to knock out one heartfelt rock song after another. At times they had the joyful camaraderie of three schoolboys at their happiest, youthfully bouncing around the stage toward one another and exchanging glowing smiles. Allen charged away on drums as McCarthy bellowed the rousing and emphatic lyrics of “Headlong into the Abyss“. “Call the police, go ahead call your priest! Call whoever you want! I ain’t gonna’ wait around for some pill to kick in!” he hollered. I was just about ready for the fuzz to raid the stage and wrestle the band to the floor as they’d refuse to abandon their instruments in rebellion. But that’s just my imagination talking…

Back in reality, bass lines from Sanderson stood out on the darker track “Juarez“, though he has considerable stage presence at all times; and “Ballad of a Patient Man” is a testament of glorious rock music storytelling coupled with the sweetest of romantic notions. (That one melts my heart every time!) The guys also played “Strange Days” which incorporates the whimsy of synthesized horns – and a gorgeous ending that demonstrates McCarthy and Sanderson as the brilliant songwriting duo they have been since (former band) Pela days.

Just before the performance of album-standout “Chapel Song” (which has one of the most simple and awesome music videos ever) McCarthy pointed to a young woman near the stage he grew up with and explained this next song would be for her. Queue the recognizable drum beat for the hit song about attending the wedding of someone he still loved and people started to piece together that the person we can call “Chapel Song Girl” was actually in attendance. Perhaps he even once looked in her direction as he sang, “Tear up the photograph! ’cause it’s a bright blue sky.” My translation: Let’s not look back into the past when today is a new day and we can live in the now.

Speaking of living in the present, the band paused to convey gratitude toward playing on the House of Blues Chicago stage. McCarthy remarked it was a privilege – and Sanderson took in the sublime view and spoke with radiance, “It’s moments like this you’re happy you’re alive.” Even with six enthralling songs done, a surprise cameo by Chapel Song Girl and endearing moments of humility, the experience wasn’t yet done.

The song before last was a stripped down piano and vocal version of “Philadephia“, the singer’s moving and heartbreaking tribute to the tragic loss of his younger brother James. Lock eyes with McCarthy while he sings this song and you will witness how he shares his pain in the most honest way one human can with another. Consumed by the emotion, yet still ever so connected in that moment, tears welled in his eyes and blended with the sweat dripping from his face. When the song ended you couldn’t so much see a frontman who’s been on Letterman, but instead a tender human who invited you to feel a slice of his very raw emotion.

If that was too heavy for you, don’t fret; it’s about to get uplifting up in here. A well-planned follow-up to the song of brotherly love was the closing song, “Book of James“. McCarthy announced, “This isn’t a sad song. This is a dancin’ song.” While this track is also about the loss of his younger brother, it’s a spirited tribute to finding peace and forgiveness after even the darkest of times. For McCarthy, this song rings as a declaration that in the face of everything life has thrown his way, he is so very alive. In fact, the entire Rise Ye Sunken Ships record is a celebration that we all are just that – alive. So you know what – let’s shout. Let’s rock. Let’s hold nothing back. It’s a bright blue sky, people.