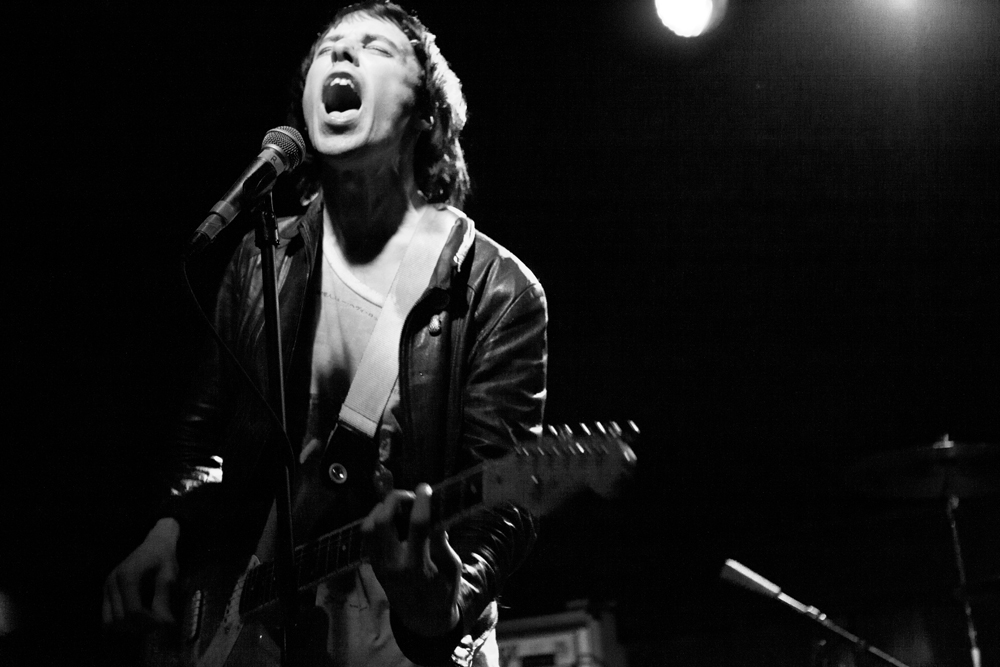 Rocking a bowl cut like the serial killer from No Country for Old Men, The Cribs’ Ryan Jarman lit up Schuba’s stage.  Consistent with British punk rock style, stripped long johns underneath remnants of a shredded up pair of jeans and a paper thin dirty white tshirt hung off his skinny frame. His sea foam green guitar seemed an extension of his body. All in the same movement, Jarman staggered and flailed dead weight around, actually barreling into his mic stand once, then sprung up into vertical leaps. The energy was manic and constipated, and it was fucking fantastic.

From West Yorkshire, UK, this sibling band, consisting that night of twins Ryan and Gary Jarman and their little brother, Ross, on the drums, shouted incomprehensible lyrics to an amped up crowd. Hearing the audience singing along, Ryan asked if they were repeat customers.  Clearly, most of the fans were. Mentioning that the band not only recorded part of their album in our fair city, but had actually written a song about it, he, as most artists here on tour do, professed his love for Chicago. He said emphatically, “I’m serious! I was supposed to live here!”  A little dejected, he mumbled something about it being hard to get through customs with a patch that says “THE NEED FOR WEED” on your jacket, and shrugged.  Crass, irreverent and totally likable, Ryan said, “I’m not saying that just to kiss your ass, I don’t have that in me”.

Refreshingly so and without an ax to grind, these boys don’t give a shit. They own that attitude unapologetically, but most of their tunes are catchy crowd pleasers anyway. Before launching into “Anna”, they proved to know how to pander just enough to the powers that be. They declared dryly, only somewhat tongue-in-cheek, “Here’s our pop single…to hit the charts”.

The Cribs amassed their own loyal fan base initially by opening for bands such as Franz Ferdinand and Bloc Party. They continued their trajectory in 2010, earning a spot on the Coachella bill, despite having to cancel, and playing Lollapalooza. Embracing a “lo-fi” sound, their live performance sounds almost identical to their recordings. They had no problem packing Schuba’s on a Monday night and could probably fill a bigger venue as headliners. In fact, I wouldn’t be surprised if they do the next time they come to Chicago. Given their affinity for the city, I’m sure it won’t be long before they do.

The Bright White at Schubas