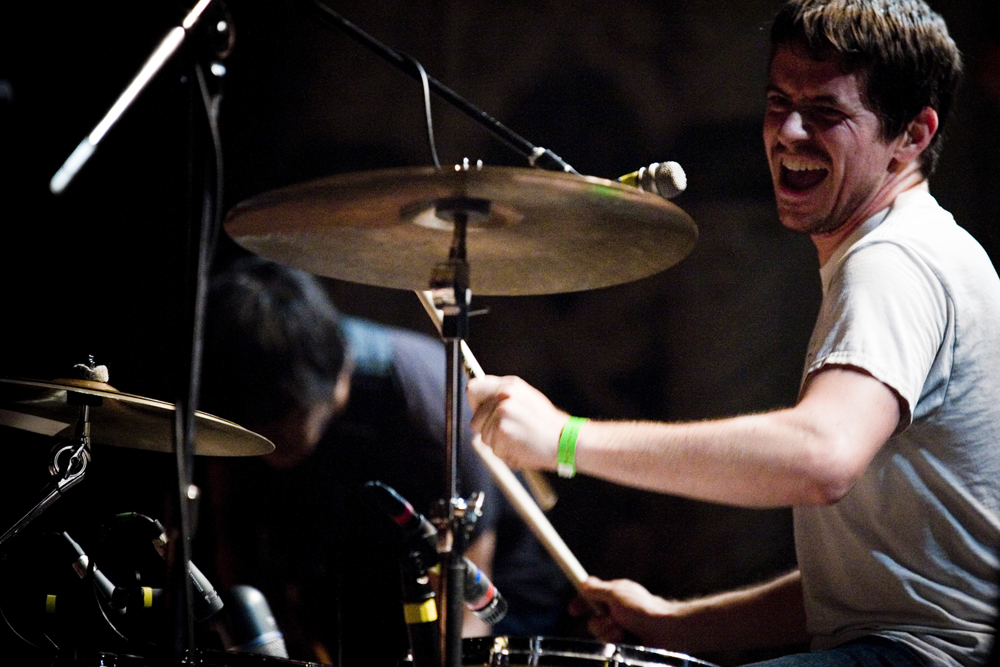 The Dodos at Metro

With a simple “Greetings, Earthlings” spoken in front of a sparsely lit, curtained Metro stage, the Dodos (+1 touring guitarist) started a show that would ultimately, almost devolve into the Jersey Shore. With a little bit of band enticing, feet were stomping and fists were pumping in an hormone-fueled flurry that was only missing wife beaters and copious amounts of hair gel. It also happened to be hot as hell. The crowd was composed of people that were decidedly un-Shore, but that’s the kind of effect that The Dodos have on people. One minute you’re quietly the lyrical lilt of Meric Long, and the next thing you know some dude’s sweaty armpit is in your face. When you’re seeing The Dodos live, none of this is a bad thing.

There was no bass guitar or no kick drum, but there was a tambourine taped to drummer Logan Kroeber’s foot. The traditionally indie sound that you heard on the album evolved into a much grittier, almost roots sound that was more evocative of Krober’s metal experience than the indie sound on the album. Which is probably the primary reason the drum kit is front and center. The guys are arranged in a straight line, but just like tic-tac-toe, the most powerful spot is the one in the middle occupied by Kroeber. The inimitable finger-picking force that is lead singer/guitarist Meric Long steps aside (but only slightly) to let the interaction of the instruments themselves shine in the spotlight.

Inevitably, you’ll end up finding some way to participate in the sing and dance-along. Honestly, it’s a miracle there’s even a review for this show because the drum cadence was so hypnotically captivating that even writing these words was tedious because more often than not the pen was tapping along to the beat furiously. This is one pair of dodos that’s anything but extinct.