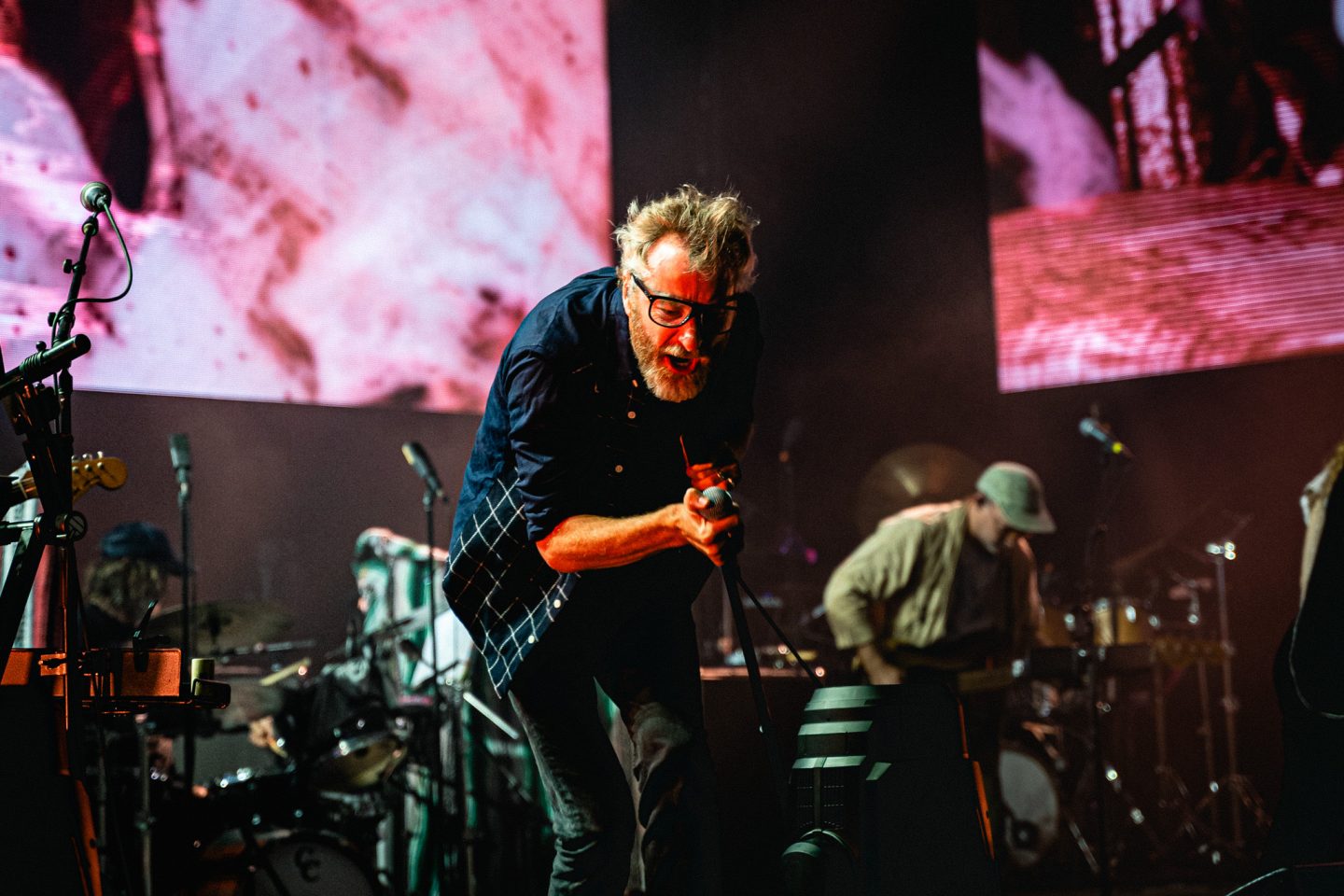 The National at Salle Wilfrid-Pelletier

“How many times? 106? 106. It was good. Every one was perfect,” Matt Berninger, vocalist for The National, recalls on stage as he describes the ‘durational performance’ of their song “Sorrow” for what could be categorized as a work of art entitled A Lot of Sorrow. As an added bonus to the day, the six hour piece was screening just down the corridor at Montreal’s Musée d’art contemporain. When I learned that I would be attending and photographing this show, I simultaneously learned of the exhibition. Taken as a sign, that it was going to be a “The National” kind of day, I headed down to the MAC. Even if you take in this piece for an hour, which is all I managed, it takes you on a bit of a head trip and leaves you in a mesmerized, almost dreamlike, state. As The National launch, a bit shakily, into the song deep in their set this evening, the crowd erupts as to salute the band and offer their thanks for offering it up live.

The National played an almost exactly 2 hour set, including a 30 minute encore, to a packed house. The whole evening was magical, a celebration almost. The sound was absolutely impeccable, as the Salle Wilfrid-Pelletier is often utilized as a fine art, ballet, theatre, etc performance venue. So, it was a special treat to see a rock band of The National’s caliber in this amazing space. The crowd stood immediately when the lights went down and remained that way for the entire duration. Huge props here to the entire band…they are masters of their craft.

Anyone who follows The National, knows that Matt loves to spend a lot of time down in the crowd, wandering the aisles, climbing over chairs, hanging from the box seats, interacting with the crowd and more. This night had all of that. A bottle and cups was distributed at one point for a group toast down in front and there were multiple occasions of cell phone theft where Matt took fan’s mobiles and proceeded to film whatever he felt like…himself, the band, the crowd, the stage hands before returning the device to the lucky fan. Another intriguing moment comes when Matt proceeds to describe that one of their equipment trucks hit a moose while driving in Canada. The crowd seems puzzled…c’mon…with the moose story, really!?!? Well, he was dead serious and proceeded in a manner that was very sincere and not pandering whatsoever. He proceeded to salute the driver for not swerving and thus keeping all their crew safe and the truck on the road. He’s sorry about the moose of course, but the genuine thanks and even acknowledgement of a bit of luck, has us all bowing our heads a bit in appreciation of the gravity of that situation.

As if the night couldn’t get any better, Matt decides to take this Mr November routine straight up the side I was seated in. He makes his way back, trudging his way along atop the seats, holding onto fans for support. He arrives at the side boxes and half hanging off the Sortie sign offers the mic up to fans hanging over the edge. Then, holy shits, it happened!!! He takes a few steps further back, drops down into the aisle, turns, and proceeds to start coming across in the aisle directly in front of us. And damn, it keeps getting better. He stops quite literally directly in front of us. He was so close…I kinda lost my shit…time was suspended. Those few minutes, they were eternity. I had enough time to even ponder how smudged up and filthy his glasses were from an evening of fidgeting with and pushing them up. Some kid, is going bananas beside him. Matt turns. He grabs the kid by the shirt and the two of them proceed to share the mic screaming it out…”I won’t fuck us over, I’m Mr. November. I’m Mr. November, I won’t fuck us over. Won’t fuck us over, I’m Mr. November. I’m Mr. November, I won’t fuck us over.” He kind of throws the kid back at the last word. They are both completely amped up. Matt takes about 5 steps away to move on then abruptly stops, turns, walks back to the kid and gives him a firm pat on the shoulder before disappearing off into the crowd. The kid is standing there holding his head. He is shaking. He not only just shared one of the most intimate experiences with one of the best rock performers ever, but he got a pat on the back of approval. Hell, I was shaking just watching that.

This is why we keep coming back.

By the way, check out the full setlist down below the photos.

You Had Your Soul With You

The Pull of You

I Am Easy to Find

Where Is Her Head

The System Only Dreams in Total Darkness