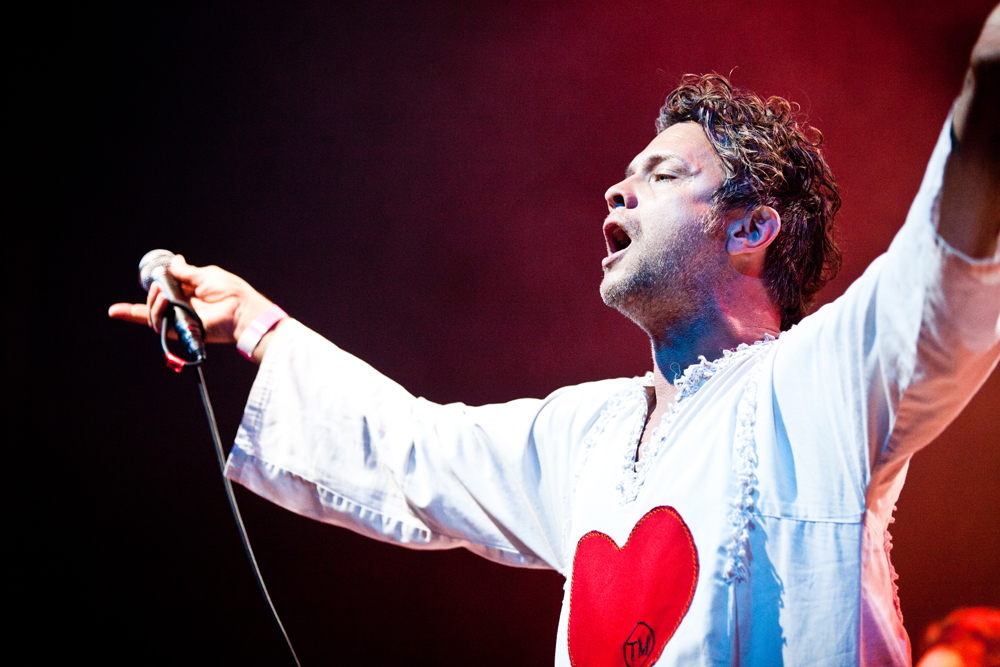 The Polyphonic Spree at Park West

On a Wednesday night in May, at the Park West, I think I had the religious experience that everyone told me about in confirmation class a decade ago. One guy on stage being birthed through a heart-shaped opening in a giant red curtain that spans the length of the stage isn’t exactly what I had in mind for a white light moment, and it definitely had sexual undertones, but hey, let’s see where this concert goes.

There’s a warm, calming echo of music emerging from behind the curtain that added a certain warmth to the otherwise dark room. Sweet, staccato notes punctuated the air like bugs frolicking lackadaisically through a Disney landscape. Little by little, invisible hands holding possessed scissors cut the curtain bit by bit and scattered it to the crowd. And then, chief vocalist/conductor/cult-leader Tim DeLaughter emerged to a chorus of what can only be described as whale mating calls. Surrounded by more than a dozen people adorned with white robes, and appropriately giant red hearts, they all began to sing and dance playfully around the stage.

The overtly happy message could be construed as over the top, and even creepy, but it’s still bright and uplifting music that you wouldn’t be crazy to take your kids to see live. Everyone in DeLaughter’s collective (band just isn’t appropriate) buys in to this message and puts their musical chops on the line in the name of the audience having a good time. And believe me, the audience had a good time. I haven’t seen audience participation like this outside of a Southern Baptist choir in all my life. There were no hallelujahs or Hail Marys getting thrown around like lyrics, but the emotion behind them was there. A lot of people really love The Polyphonic Spree, and rightfully so. The positive message, the talent, the lack of rules and the sense of belonging are all part of it, but there’s also a killer light show.

I guess what I’m trying to say is, seeing The Polyphonic Spree live is like watching a church choir on ecstasy–without all the *insert popular religious deity here.*