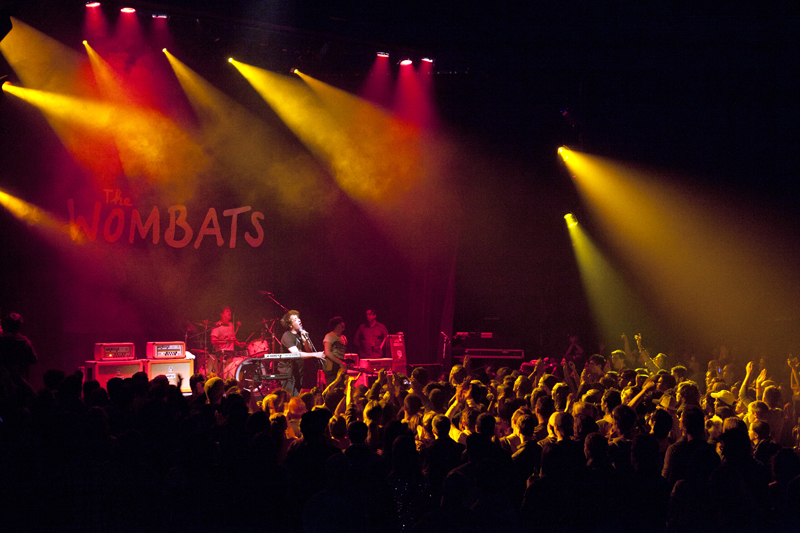 As the Wombats made their way across the stage, the venue remained dimly lit. Energy was pent up around the audience with the lighting staying low and those in attendance were more than happy to clap to the tempo of “Our Perfect Disease” as its relaxed opening kicked off the show. The introduction was calm, but waiting for them to let loose was worth it. When the first big hit finally landed all that energy spilled out. From that point on the guys from across the pond were relentless; no matter what they played.

Tord Øverland-Knudsen did his best impression of the energizer bunny from start to finish. The bassist marched all over stage, but his fingers never let up. That goes for Matthew Murphy too. When he wasn’t on instrumental double duty (guitar and keys), he was up close and personal to the crowd; or sharing musical moments over at the drum set. Between facial expressions and various arm movements/hand gestures, it was easy to notice passion in his lyrics without even hearing the words. Murphy’s vocals were extremely clear, and his pitches were consistently on par. There are times when come across an album clearly littered with more instrument tones than members. For me, it’s always fun to see how the artists pull it off. In my opinion (which is what this whole thing is), a certain level of musicianship is achieved when all hands are on deck to make sure no note gets left behind. This type of effort was in full force during “Little Miss Pipedream” for instance, which saw Øverland-Knudsen put down the bass solely to play the keyboard. Behind the set, Dan Haggis also played the keys along with harmonica; while his feet kept the beat on bass drum and hi-hat.

Music aside, the trio was extremely likeable and absolutely knows how to entertain. Quirky comments from Murphy or Haggis kept the mood light between songs and smiles across the stage from one another displayed genuine enjoyment. Prior to “Let’s Dance to Joy Division” Murphy told those who crowd-surfed ‘they appreciated the commitment’. Now, I might not have partaken in those activities, or opted to sit out the tug of war between three young ladies over a towel (dead serious, that happened); but the feeling was more than mutual.