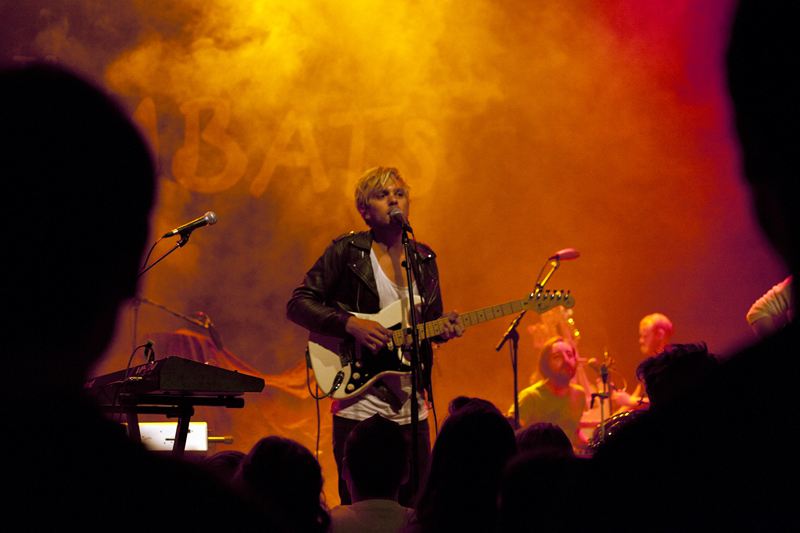 It was quite the night for The Royal Concept and Park West. For the group, it was their first time playing in Chicago. I can imagine they were as nervous to play (yes nerves do exist for even the most experienced musicians) as we were anxious to see, I mean hear what was in store for us. The guys hailing from Sweden snatched up the crowd’s approval almost immediately.

Speaking of snatching things, the Royal Concept front man David Larson surely made someone’s night when he snagged a fan’s phone and played the role of cameraman. Sure, anyone can show of a clip from a concert; but how many people can relive the song from the lead singer’s vantage point? I now know of one person. The catchy guitar riffs spewing out of the speakers were supported by solid dance grooves. They were the type of sounds to make me upset summer was more or less over. The type of sounds I can picture myself listening to in my car with the windows down, rocking a pair of Ray-Ban’s, and letting the wind blow through my luscious locks…Too much? Sorry, back to the music. Indie rock and electronica co-existed in the melodies and harmonies. The genre lines were blurred even more when Larson introduced us to vocal synth during “World On Fire”. An effect he used tastefully and far from overbearing.

There were a few moments I was waiting to hear something to sing along with. The music seemed so familiar, but with each passing song my ears were only introduced to new material. Not complaining, but it was bugging me a bit. Then they pulled it out. The opening to “Gimme Twice” came on to give me the: ‘ahhh there it is’ moment. Dancing around me had escalated to new heights, girls in every direction shrieked as Larson removed his shirts, and it looked like Frans Povel struggled to stay seated behind the drum set in exchange to bust a move. Just as The Royal Concept had the audience securely in the palm of their collective hand, the set was over and Chicago is left to wait until their next trip to “D-D-Dance”.

The Polyphonic Spree at Park West