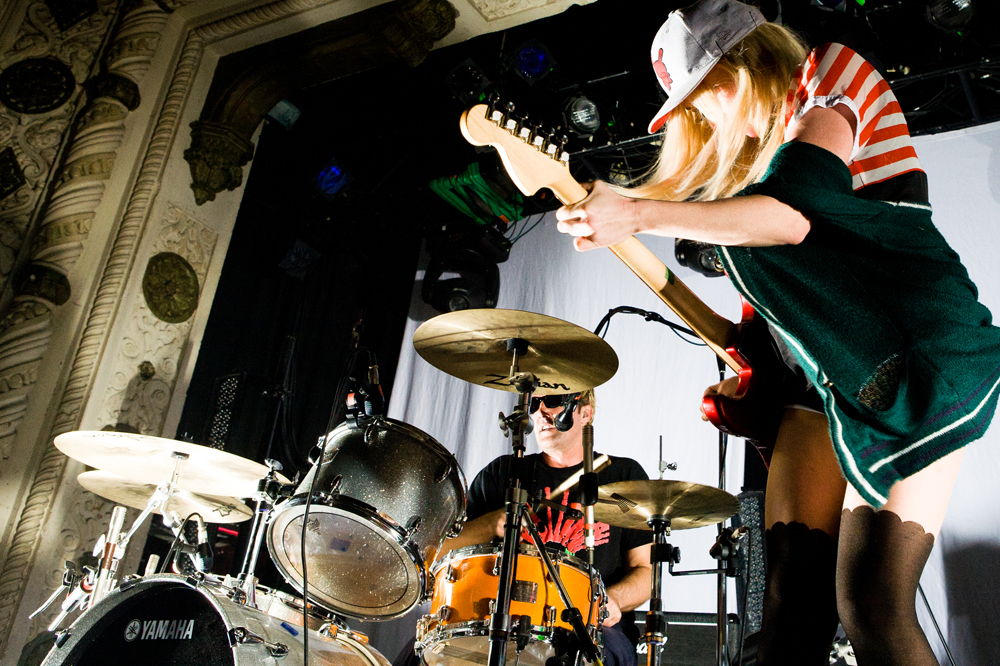 Yes, before you ask, The Ting Tings played “Shut Up and Let Me Go.” Before we shut up and let you go look at the pictures (sorry, too easy), we’re going to talk about their raucous performance.

There aren’t many musical duos talented enough to fill Metro (with bodies and sound); The Ting Tings are one of the duos dynamic enough to pull it off. Katie White and Jules de Martino are both completely capable of making every noise that bears the name The Ting Tings that you’ll hear come out of a speaker, and yet, somehow, neither one of them seems unnecessary. Behind the kit, with or without a guitar, de Martino is just as instrumental to the performance as White is when she’s looking all hot and bothered front and center. de Martino is a just-slightly-behind-the-scenes specter that plays a perfect yin to White’s anachronistic, Victoria’s Secret gym clothes with fitted cap yang. Maybe it’s the understanding of the individual parts that each of them play in the sound, but these two work together like Batman and, well, Batman. There’s no sidekick in the dance party alternate reality of The Ting Tings.

Live performances are supposed to be different from their recorded counterparts. Little mistakes here and there. A palpable live energy. It’s supposed to be a show that you’ll want to write home about. The Ting Tings are the textbook definition of this. You can throw on anything from Sounds from Nowheresville or We Started Nothing and start a party that will leave you, even if you’re solo, tapping your feet and singing along. Live, The Ting Tings are nothing short of a religious experience. You either dance by choice or you get elbowed and stepped on by the people surrounding you until you’re making the same gestures anyways. Why fight it? It’s much more fun to play along and just have a great time.