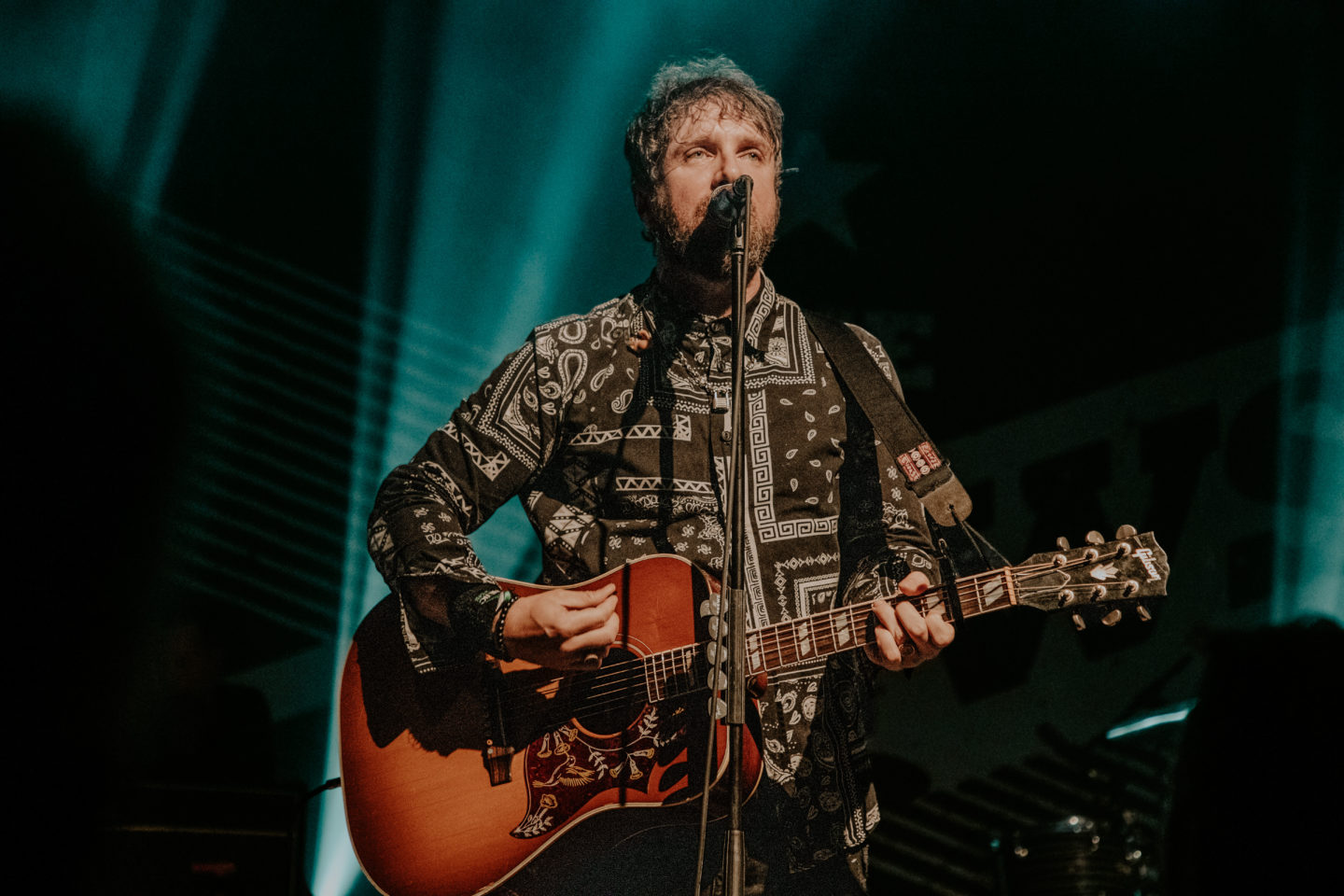 The Trews at Commodore Ballroom

It didn’t take more than a few chords of “Ishmael and Maggie” for the Trews to have their audience at the Commodore Ballroom in full swing. Choosing to do an acoustic set before their plugged-in set may be a risk for some, but these guys know how to imbue all their music with energy that fills the room. This was the case throughout the whole night; even when my own energy seemed to wane (I am still building back concert stamina after all these years), the band would launch into another hit that would electrify the room.

The acoustic set was helpful in accentuating just how well-tuned this group is as a whole. The backing vocals, which can often get lost in the mix of a more amplified set, created a wall of harmony that both evoked the salt-brined air of their homeland of Nova Scotia, and yet shouted out, “We are here to rock.”

John-Angus Macdonald showed that his lead guitar on the acoustic comes across as both technical yet rhythmic. It never overpowers a song, and it always moves with the band as a cohesive unit. This fact was also accentuated by Jeff Heisolt’s various accompaniments, especially on keys. Not to be forgotten, however, is Jack Syperek’s bass whose lines never stay in one place but always support the movement of the song. Throw in Chris Gormley’s drums which hit clean and hard, and you have a master class in how to perform. Having all the accompaniment in the world wouldn’t work however without a voice like Colin Macdonald. It has a rasp and range in just the way you want it. You can hear the heritage of other Canadian acts coming through, but rather than a rehash of what has come before, Colin has made it his own.

When the acoustic set came to its close John-Angus was left by his lonesome, to continue an acoustic solo, that somehow sounded like a one-man jam session, playing lead and back up simultaneously. The transition into the amplified set was subtle yet powerful as the remainder of the band came back on stage. Somehow it felt as if after an hour we were just getting started. When “I Am Not Ready to Go” began it was clear that the acoustic set was merely the fuse to the explosion of what would be their second set.

This electrified set brought even more energy as if that was possible. Chris on the keys showed that he could add a softness that helped bring joy to songs like “Paranoid Freak” which could fall into the overly serious category. His solo was sheer musicality yet never overly indulgent in order to hold the momentum of the song. The crescendo through this set ended with an epic drum solo and guitar solo, that John-Angus took throughout the entire bar. It is clear that he is a man of few words but of great actions, as he traversed every corner of the venue, to make sure that each fan could have that up-close experience of a rock show. Ending the set with some of their biggest radio tunes, and therefore some of the biggest sing-alongs, the likes of “Tired of Waiting” was a triumphant ending to a stellar second wind of a concert.

Of course, that is not where it ended, because no sooner than when the band left the stage the encore shouts began. Once again, Chris Gormley got his chance to display his prowess on the ivory. The thing that struck me throughout the whole night is that on paper, none of this should work. Each set showed that there are somehow multiple bands stuck in one. Are they traditional rock? Are they east coast folk? They’re somehow all and more. They can move from folk-infused to heavy rock, and yet never lose their core identity. I went into this concert vaguely knowing who this band was from the radio, and I left being a true fan, because of this cohesive unit that they have created. They are truly a whole, and I wish more bands could feel as such.