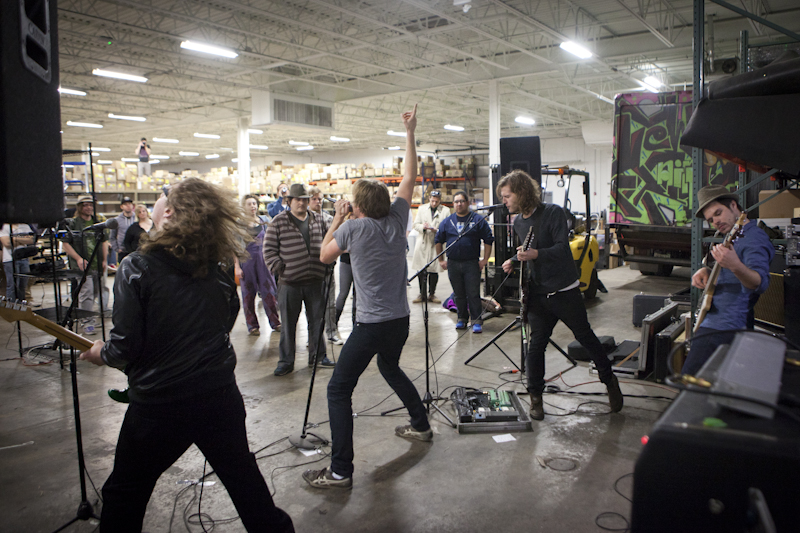 In between a forklift and a Ford Econoline, local band Empires created a makeshift stage on the floor of the Threadless Warehouse and redefined power lunch for a few lucky listeners and Threadless employees.

Start to finish, the show was the perfect definition of garage rock. The perfectly executed, grungy guitar riffs and harmonic slides, the thumping bass lines and drumming that bordered on musical violence all came together to create an atmosphere and performance straight out of a Foo Fighters video performance. And then there was lead singer Sean Van Vleet.

Throughout the performance, he was apparently on a date – with his microphone. He whispered sweet nothings in its ear, screamed at it, cradled it tenderly and threw it around in the throes of passion. Looking on in sheer amazement – and occasionally complete disbelief – he managed to elevate the entire band to rock star status. We’re talking cover of Rolling Stone, should probably be in rehab, has a few albums that went multi-platinum rock star status.

As the larger than life performance breaks between songs, someone runs in to weigh down the drums with random free weights because drummer Ryan Luciani was exercising his muscle chops so hard the drums weren’t stable. Van Vleet removes his jacket to reveal a hoodie. Then he strips out of that and into a t-shirt. Presumably because he was running in place, busting out sweet dance moves and entertaining the audience so energetically that was either too hot or sweat through his clothes.

Totally captivated by the performance that just happened, no one in the audience really seems to know it’s finally over. After I helped contribute to the collective sigh of disbelief (or maybe disappointment), I glanced at my watch. That superstar performance that we all just bore witness to only lasted twenty minutes which makes it the shortest “official” performance I have ever seen. Honestly, I can’t decide what’s more impressive – their performance itself, or the fact that they crammed it into twenty minutes. I’ve been to shows five times as long that weren’t half as good. I’d probably watch it every day on lunch if I could…

Wait, I can and so can you. Thanks to Threadless TeeV, you can watch the concert in its entirety. When you’re done with that amazing show (and you’ve checked out a t-shirt or three on Threadless), go vote for Empires in the Rolling Stone Choose the Cover contest. No unsigned band has ever been on the cover so we should help make the first time special – with Empires.