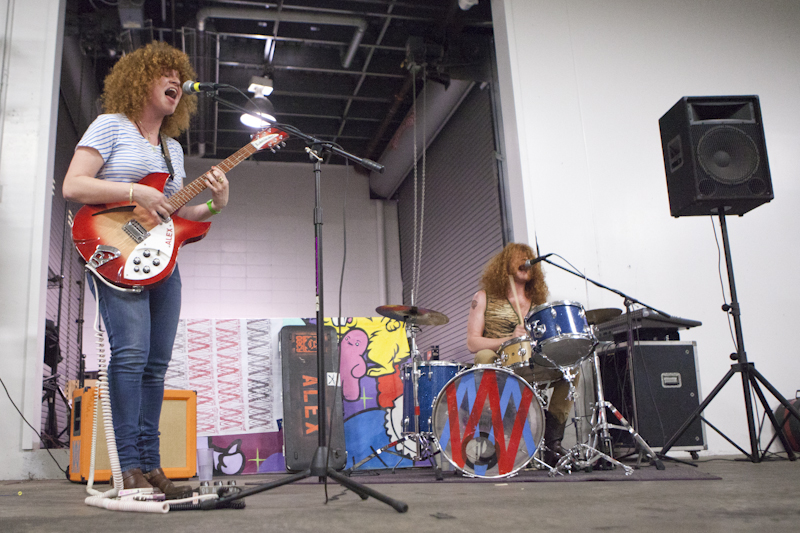 “We are White Mystery.” The only mystery is why these two talented redheads don’t already have a huge distribution deal. It’s definitely not their sound because as soon as Alex has a guitar around her neck or Francis has a stick (or two, occasionally) in his hand, it’s absolutely clear that they fucking rock. And White Mystery is exactly how rock and roll should be enjoyed: with leopard print, huge hair, sunglasses and whiplash-enducing headbanging. [Sidebar: Francis’ neck should be studied for science because there’s no reasonable explanation how someone can headbang that hard, for that long, without serious injury to himself and people around him.]

There were no explanations of political beliefs, moral choices or other personal opinions that, in our opinion, take away from a set. It was pure, adrenaline-fueled, non-fucking-stop stripped down garage thrash rock. The strict adherence to the finer things about a rock performance leads them to play with an almost reckless abandon that is as fun to watch as it is dangerous. Not the sort of danger that’s hazardous to your health (most of the time), the type of danger that rock and roll is built on.

The warning label should have read “Watch for flying objects.” Whole drum sticks, and splinters of their former selves, could be seen flying around the Threadless Warehouse almost as much as they could be seen in Francis’ hands. Any other musician would have turned it down a little, but Francis just played with his hands when no sticks could be found. When the drums fell over – which they had a habit of doing – he just kept playing. Then there’s the headbanging. It’s a miracle his head is still attached to his neck.

Make no mistake though, Alex doesn’t let her brother Francis have all the fun. Her guitar is almost as big as she is, but that never once stopped her from making it her bitch. She bends that sweet instrument to her will as she struts, jumps and headbangs (it must run in the family) around. She’s willing to get down and dirty too. We’re not just talking about the rock and roll growl that rolls off her tongue. We’re talking backward, upside down, playing the guitar above her head on the warehouse floor, dirty.

It’s pure rock and roll in its most unadulterated form. But don’t just take our word for it, watch the entire concert on Threadless TeeV.

(Special thanks to Threadless for another fantastic show.)