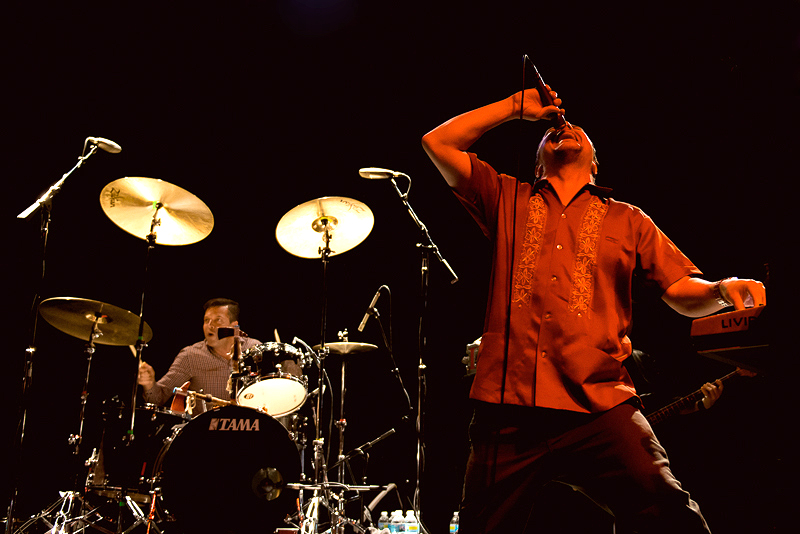 Tomahawk draws an odd crowd. It was definitely the most diverse crowd for any metal-ish act I’ve seen, even weirdos (in the best way) like the Mars Volta. Only about a third of the audience was wearing black, and I even saw one guy wearing flip flops. Who wears flip flops to a metal show?

This variety must come from the experimental nature of Tomahawk’s music. The oddball creativity displayed by Mike Patton and company is what initially drew me in to Tomahawk a few years back, and it was obvious that this is what so many other people were craning their necks to see at the Vic Theater this past Friday. “What crazy shit is this guy going to ‘sing’ next?”

And oh man, did he “sing” some crazy shit. Patton’s vocals are certainly the centerpiece of Tomahawk, who released their fourth studio album, Oddfellows, earlier this year. “Sing” is in “quotes” not because he eschews song for screaming completely, but because calling what Patton does “singing” is not quite doing it justice. While the rest of the band pounded away, he shrieked, bellowed, croaked creepily and crooned beautifully through a set that included plenty of favorites (a la “Rape This Day,” “God Hates A Coward,” and others) and devilish new stuff, like the disjointed heaviness of their new album’s namesake, “Oddfellows.”

Patton has the most impressive control over his voice and the craziest range of any vocalist in any genre. Of course, the case can be made that one cannot compare vocalists of disparate genres, but the incredible sound effects and variety of vocal tones pulled off by Patton, without even his usual array of different microphones, have no rival. Throughout their 90 minute set, I heard so many “oohs” and “aahs” from the crowd reacting to Patton-made sounds their brains had never fathomed.

All this focus on Patton is fair, but I can’t leave out the rest of the band. Drummer John Stanier, taking a break from his other experimental band, Battles, is a freaking tour de force, and he and bassist Trevor Dunn lock in together as good as any heavy rhythm section. Duane Denison coaxes some of his own left field textures on guitar as well.

Speaking of left field, after an hour and a half of abrasive, hard-hitting strange-metal, Patton and company closed their set with a decidedly unmetal cover of the countriest of all country songs, “Just One More” by George Jones. And this is another testament to the musical intelligence and sense of humor of Tomahawk fans: Everyone loved it. It was a straight-up country song, and this crowd of experimental metal fans ate it up like fresh fried chicken and grits. It’s a testament to Tomahawk’s musical prowess as well; for those three minutes, they were an honest, hardworking country band that makes their living playing in dive bars in the South.

Which brings us to the bittersweet part. The part when bands age. That inevitable slow slide of time that leaves no group of spirited musicians untouched.

When seeing a band like Tomahawk, it is impossible not to compare current Tomahawk with past Tomahawk. Yes, they killed it and everyone had a great time, but the energy level was slightly yet noticeably lower than early Tomahawk.

That’s just a fact of life. People get older. They jump around less. They choose not to use the gas mask microphone. That special brand of insanity in their eyes is still there, but slightly duller. I guess several years of sitting in traffic and watching your body slowly decay will do that to ya.

Musically, Tomahawk is all there. We are left wanting nothing. Their new stuff really does stand up to their older stuff, and it is exciting when a band can take a break and come back full force like this. But I was looking for that trademark crazed glint in Patton’s eyes, and it didn’t even show up until the fourth or fifth song.

That being said, I will go see Tomahawk until they call it quits or until that “insani-glint” fades completely. And it is still there, folks. It is still there.