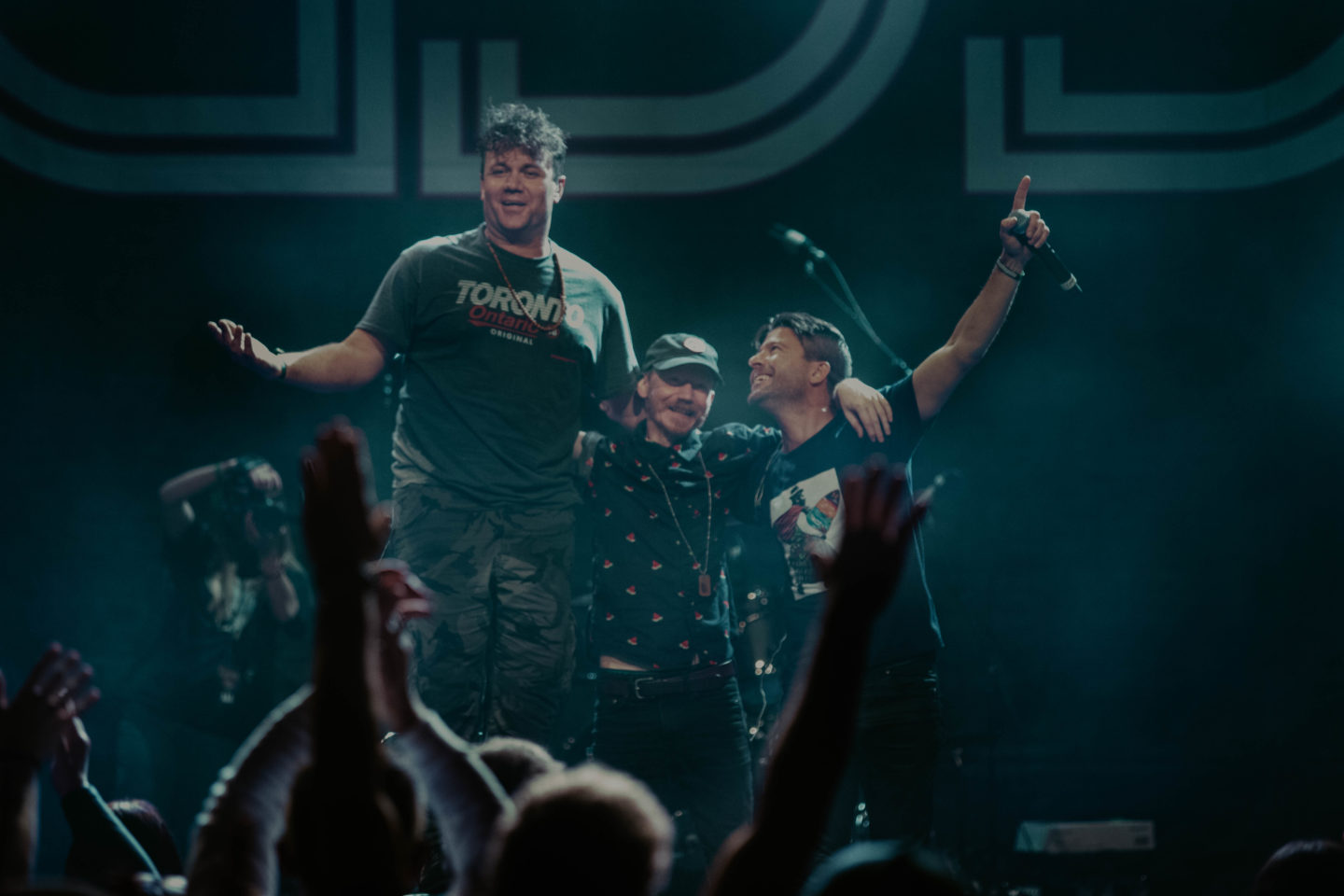 To say that USS has energy is an understatement akin to saying the Grand Canyon is a neat little hole, or Everest is a fine hill. It did not take long for the madness to fill Vogue Theatre when they began with their radio hit “Yo Hello Hooray.” With an aggressive acoustic attack from guitarist and lead vocalist Ashley Buchholz and Jason “Human Kebab” Parsons’ DJ/hypeman responsibilities, the two set the tone for the night. This was going to be a party.

Before the second song could even begin, the entire crowd was chanting U-S-S, and as if to signal to the crowd that this crew would not relent, they launched into their blisteringly fast “Anti-Venom.” It was about this point, a whopping two songs into the setlist, while Human Kebab was standing on his head, scratching his turntables, I discovered that this was not a concert I would ever forget. In fact, being USS’ grand farewell tour, it was evident that they wanted Vancouver’s final time with them to be burned into their collective memory.

They continued to push forward with another radio hit “Work Shoes,” which, if it wasn’t already apparent at this point, slayed the crowd. Shifting into an only slightly different gear “Us,” from the same album, came on. From here drummer Matthew Patrick Charles Murphy, also known as M C P M, put on display his power to carry a hard-hitting beat, that keeps all things in line: never too over the top to overpower, but always present and always driving.

With each progressing song, it was clear that there was no way to define these guys. They are somehow a bit hip hop, a bit punk, a tad grunge, a touch of folk, and a smattering of EDM. On paper, none of this should work, but that is the magic of watching USS. They are so earnest in their delivery that you discover this music that you didn’t even know you needed.

The night pushed on with a relentlessness that could never be quite quenched. Hit upon hit rung out, and the adoring fans only desired more. The sing-alongs were full, and the dance breaks were frenzied, but some moments to settle the sheer pace that USS set was great to see. Some of the reflection that these two had for their time together was great, if only in snippets. “If it weren’t for this guy we’d have to stuff these 700 people in my parent’s basement,” Buscholz mused, and in return, the Human Kebab declared, “If it weren’t for this guy writing the songs and lyrics and sharing them with me, we wouldn’t have this following.” They were clearly grateful for the time and effort each put toward bringing them to this point.

The night had so many twists and turns that it became hard to even decipher if what you were experiencing was real or not. I distinctly remember a Hakuna Matata cover, but even writing that down, there is no way that possibly happened. Right? It was these kinds of thoughts and the what-is-happening moments that kept a grin on my face the whole evening. The main set ended with by far their biggest crowd-pleaser “Yin Yang.” The whole show had crescendoed to this point. They left the stage, and unsurprisingly the call for their return occurred instantaneously.

A chair was pulled out for Ash to take his ‘singer/songwriter at an open mic’ stance. He appeared on stage and quickly ended that visual. “Apathy is my kryptonite, so fuck chairs!” He cried as he flung it away from the stage.  This led to the song “Harmonize” from the group’s surprise release The Science & Artfunkel Victory Lap. In this quieter moment, it was a great chance to hear Buscholz’ range. He has a grittiness to his voice, that somehow still comes out smooth. Imagine, in some alternate universe, Kurt Cobain sings for Mumford and Sons, and you begin to understand the uniqueness of Ash.

They worked through some more hits like “Who’s With Me” and “N/A OK.” The latter providing a moment of surrealist comedy and yet introspection. Turning to the chair he had previously outcasted, Ash brought it back to embrace, to hold, to be, as his own lyrics put, “tangled up.” In this moment he spoke to the chair, and even to the gum on the chair. Then he consumed the gum. Everyone lost it, naturally. In fact, his fellow bandmates were incapable of standing because of this unexpected turn. Buscholz graciously told everyone, “Thank you for letting me be me.” At the end of the song, like any good rock star would do, he trashed the chair. The comfort that he had was once again thrown to the ground.

Finally, after all, was done that night, they brought out openers Hotel Mira to join them for one last song. The track started and everyone knew to sing along. It was, of course, The Killers’ “Mr. Brightside.” It was an ingeniously chaotic end to an ingeniously chaotic night. This may be USS’ swan song, but damn, does that swan know how to have a good time.