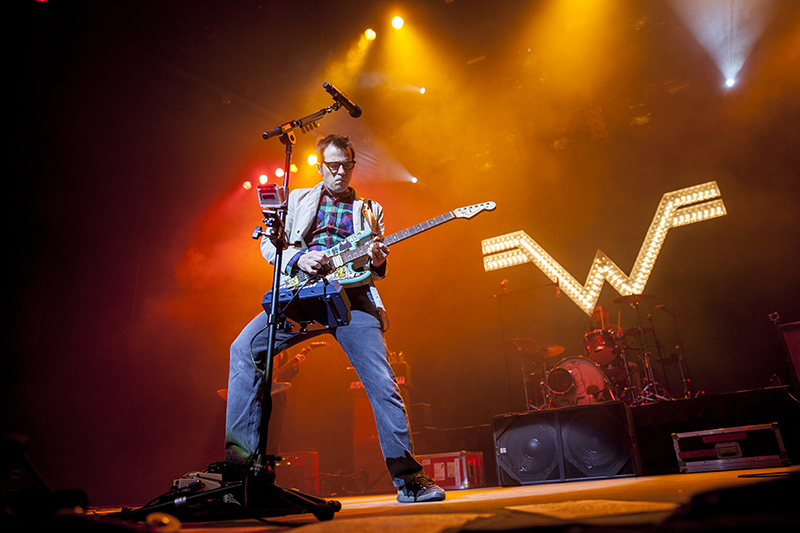 As the theatre’s lofty, red upholstered seats began to fill, from the photographer’s barricade I began to wonder how the finely manicured rows would affect the crowd’s movement during Weezer’s highly anticipated, sold-out performance. As it turns out, they had no effect at all!

Jeff the Brotherhood, with their hilarious banter and equally as playful songs set the perfect mood for what was to come. Fog began to pour and an ever-so familiar 20th Century Fox intro song triumphantly touted across the crowds’ head as everyone rose from their seats and cheered in ecstasy. The band members evenly distributed themselves gracefully across the stage as they have clearly done so many times before. Without skipping a beat (literally, seeing how every member played on the first beat) they started out sharp (much like their outfits) with “Buddy Holly” and pile drove right into “Hash Pipe”.

From the get-go, the audience shouted every lyric and bobbed up and down in a spaztic synchronicity. You could tell who was friends with who from how some were embracing one another and screaming the words in each others’ faces. It was a delightfully mixed bag of fans— every age group seemed to have been present, some maybe as young as 8 or 9!

As a long-time fan, I hate to admit that this is the first time that I had seen them live. Their on-stage chemistry was perfect and the sound that resulted from it was super-gratifying. Rivers has the chops and sick guitar shreddage, Patrick has the classic beat, Brian adds the smoothness and great hair and Scott has the energy and facial expressions. These guys are true performers and the stars to their own show.