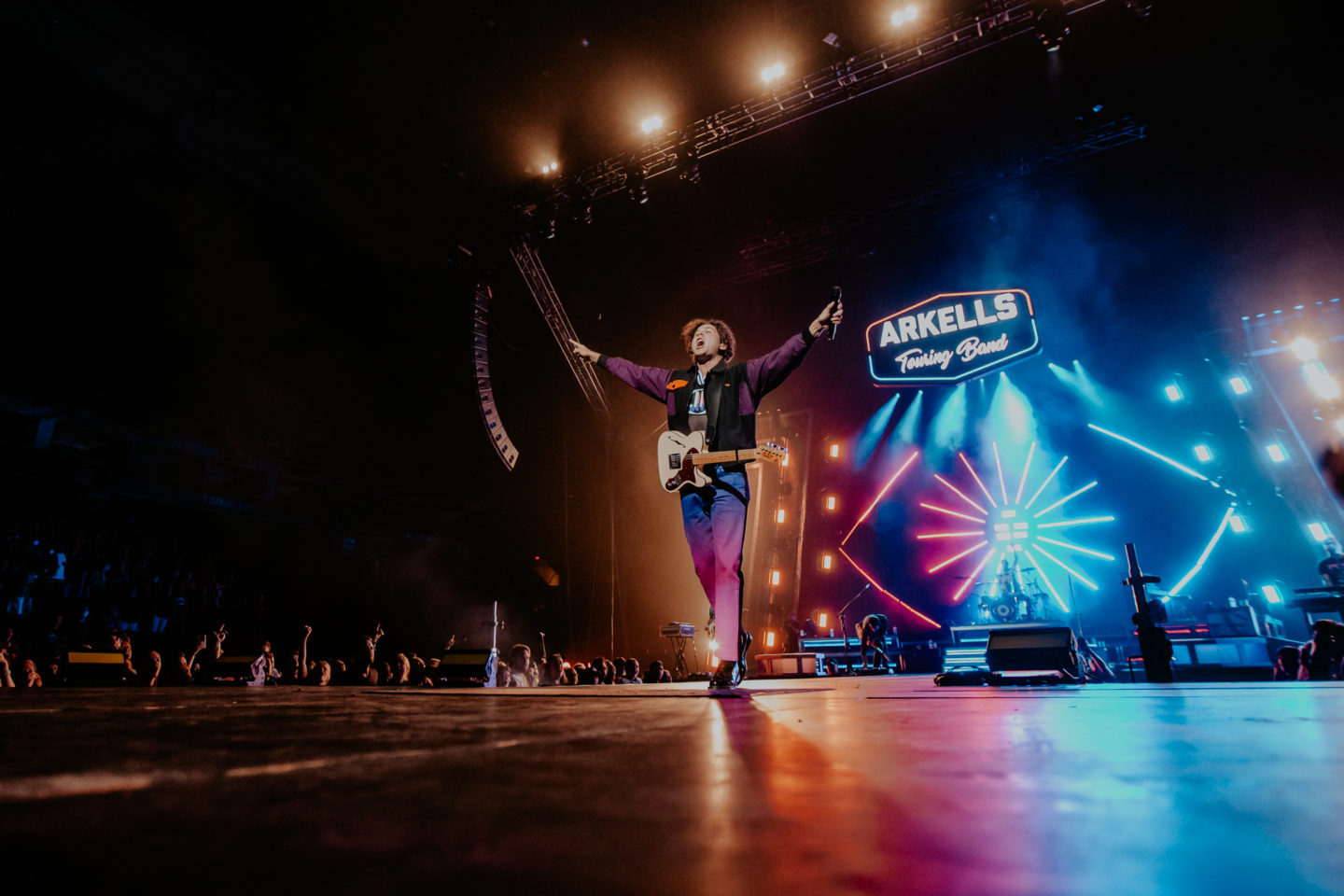 “I’ve seen Arkells more times than I can count” is a sentence I am almost able to say without hyperbole. I’m starting to lose track of how many performances I’ve seen, and yet every single time I see them I’m reminded why they’re easily my most viewed band. If you are unaware of Arkells and their live show, please, let me school you.

Rogers Arena in Vancouver can be a difficult venue to get the crowd moving. The business executive class can often be a damper on all in attendance, but Arkells wasted no time in bringing their best foot forward. “Past Life”, brought the whole crowd to their feet. This was followed up directly by their song “Leather Jacket”, a song usually saved for the finale or the encore. This set the tone, that they are not willing to rest on their laurels, but would subsist on their showmanship and musicality rather than the nostalgia of past radio hits.

“The worst enemy of rock and roll is a Tuesday night.”

By the third song, Kerman quipped “the worst enemy of rock and roll is a Tuesday night.” The band’s goal was to transport us through time to a Saturday night. When Arkells ask something of their crowd, their fans deliver, and how can you not? What other option do you have when you have a band that creates a Motown-inspired, anti-Trump anthem (“People’s Champ”) that breaks into a Rick James cover? These moments show why Arkells are such a universally loved band in Canada. They defy you to sit down, to keep your toes from tapping, and your head bobbing. Keep in mind, this is only their fourth song of the night.

It’s hard to keep from gushing over every moment in an Arkells show because they orchestrate so many memorable scenes. Bringing out hometown hero Lights to sing on her collaboration track “Human Being”, creating a ‘campfire’ with the audience’s cellphones, to sing from their acoustic album Campfire Chords, as well as acknowledging fan-made signs on stage and acquiescing to their song requests, even if it’s a track they rarely perform. Any one of these segments would be enough for most bands, but Arkells keep them coming throughout the entire show. Even having the whole band cramped together on their secondary stage to invoke memories of their first Vancouver show at The Penthouse enlivens the whole performance. I have always said that the superpower of this Hamilton band is that they make a stadium show feel like a dive bar, and a dive bar feel like a stadium. I’ve not seen a single other band that possesses this ability at every given moment throughout a show.

They’re a true unit whose separate talents add up to a sum greater than their parts.

All of this would be irrelevant, however, if they also didn’t have excellent music to back up all of their stage bravado. They’re a true unit whose separate talents add up to a sum greater than their parts. Kerman’s vocals are unique to anyone in the game, and he knows when and where to show his strengths, without ever being a diva. Mike DeAngelis’ guitar work is as solid as it has ever been. He has articulate, catchy riffs that you can’t get out of your head, and throughout the years has only gotten more experimental, and allowed himself more moments to shred. Nick Dika backs the band with his vibrant bass lines. Though he may need to get kicked out to the front of the stage from Max at times, his musicality is always apparent, as his lines never settle with just playing the root note. They add to the overall joy of each song. Anthony Carone’s keyboard work has always been sublime, and his performance always matches the energy of the rest of the band. His solos are always a delight and the band rightly gives him many opportunities to shine. Out of everyone, it was Tim Oxford whom I was especially excited for. Being the heartbeat of the band has always been a task he has taken seriously, but I always longed for him to get the chance to unleash, and I feel like this is the event where I got to see it the most. The band’s bit of settling conflict between him and Tony showed the fun that he can have, and a battle of keys versus drums was so satisfyingly fun, that I hope they continue to play around with those sorts of interactions.

Throughout the years the band has continued to grow as the Arkellian family has needed to fill bigger and bigger spaces. These large shows have afforded the boys the chance to play with the exquisite Northern Soul Horns. Added to the Arkells mix a number of years ago, they bring a kick that brings the Arkells sound closer to the E-Street Band, which has always been an influence and can be heard throughout much of the Arkells catalogue. Dennis Basslet and Yvonne Moir on saxophone, Tom Moffett on trumpet, and Ernesto Barhona on trombone all brought their A-game. They totally match the presence of the rest of the band, and each had their chance to shine throughout the night.

In fact, Arkells go out of their way to make sure their show is a community event.

Arkells are a cohesive unit, and it is this unity of purpose that makes their music so relatable. They played hit after hit throughout the night, and never did one person seem to come out over top of another. In fact, Arkells go out of their way to make sure their show is a community event. This involves giving each person a chance to shine, guest appearances, but also acknowledging the local artists that have supported them throughout the years. Said the Whale, Dan Mangan, and the Zolas are pillars of the Vancouver indie rock scene, and Arkells make a point to share their evening with each of them. This makes it hard to bring things to an end, but sadly they did, only to be brought out again through a quick encore turnaround. Rather than make the crowd wait, they clearly just want to be back partying on this incredible night. They started with the track “Reckoning'” from their newest album, and were joined by sure-to-be-a-star Bria, a young fan who Max said, “knows the words better than me.” Shortly after, Lights and opening act Valley joined the stage, to partake in an Abba cover, then to put a bow on the whole night they closed with “You Can Get It”. It had been 1,3612 days since Arkells were last in Vancouver (we know because Max told us), and based on Tuesday’s “Saturday” night, we know it will be far less time until we next see Canada’s favourite touring band.